Eeep!  This was by far one of the Scariest movie I have ever see!  It may seem cliche to say that, and you might find it odd that a film this old can still be as scary as modern horror stuff, but my Goodness this thing is creepy!  You’re reading my review of Halloween.

Basically this film does in miniature well what every modern horror film tries to do extravagantly. Every element pulls together to make this honestly terrifying – the cinematography, music, acting – all just awesome!  Truly phenomenal filmmaking that I was so excited to see.  I was riveted to my screen the whole time.

First and foremost, they need to STAB that steady-cam guy because he is bleeping creepy!!! The entire first scene was amazing!  The long-shot stalker cam set the mood, pace, tone, etc in the best way I have ever seen.  I loved how they created the POV style (and how much the breathing played in!) and really showcased that new technology.  What really made this scene, and the whole movie really, was how LONG it took! We honestly watch this scene play out for about 5 minutes!  And then they reveal that it is a KID!!!  WHAT!?!?!? 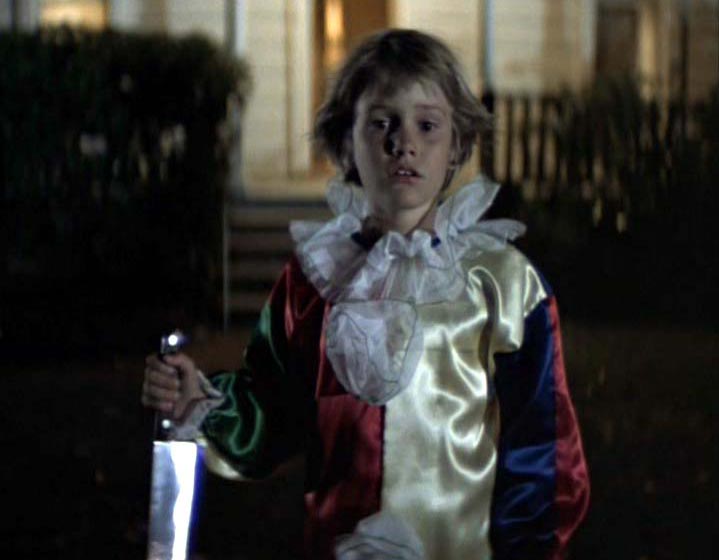 Again what really made this film was the time which they took with it.  Every shot involves long, backtracking walks that make every corner, ledge, etc a potential spot for Myers to pop out and stab them.  Also the fact that [SPOILER] it takes nearly three quarters of the film to get to the actual attacks, and even then they are so spread out that it makes you jump at every turn of the corner.

Very much like The Shining, it has a very slow ramp to the exciting bits so the tension and anxiety are profoundly expanded, enhancing this film tenfold.  The creepiness comes from the visible unknown. We see Myers stalking the girls for an hour before he does anything which makes for a nigh 0n Jaws like tension – we know he will strike, we just don’t know WHEN he will.  And that is what made this movie so actually scary to me.  I wasn’t waiting around for the monster to come out of the shadows and reveal how terribly CG it is or how poorly created it is.  I saw Mike Myers the whole time and was screaming at Jamie Lee Curtis the whole time to GET OUT OF THERE!!!

That does bring up my one negative about the film:  Jamie Lee Curtis never looked like a teenager. For over half of the film, I thought she was a mother who was going for her high school degree.  She honestly just doesn’t look young at all and that bothered me because it became hard to relate to her.  I was trying to see a scared girl my age and all that I could see was Freaky Friday.  However, she did do a great job with the role, so I can’t fault her on that. Just wish they found someone physically capable of looking not like a soccer mom 🙂

Finally (and most famously), the music turned out to be one of the most haunting parts of the film.  I had grown up hearing the main theme and I always thought it sounded a bit….”hokey”. It never had any sort of scary-ness to it, so going in I thought it might lessen the effect. However, as previously said, it did nothing to weaken the film and I think I know why.  The theme is rather silly if played out of context and if started harshly, straight into it. If you let it build though, starting early and never letting up, it becomes a constant presence. Think of it like static electricity – if it jolts it shocks but then quickly becomes comical;  if it builds up for a while, it raises the hair on the back of your neck.  Truly great work, Mr. Carpenter.

Overall, if you haven’t seen this film yet and you are interested in a truly good scare, PLEASE go see the classic Halloween.  It tops my list of horror films right now and I highly recommend it.  One of the best thus far on the Summer Film Challenge 2011 (which I am horribly behind on right now).

I would like to say that I want to see the remake of it from 2007 just to compare styles.
There you go!  Thanks for sticking around and I would love to hear your thoughts on my review here! Just leave a comment down below!

Coming Attractions include my review of Assassin’s Creed II and, if my soul feels up to it, I have another Film Challenge review to do on that…………film…..Being John Malkovich……yeah.  That one is one you aren’t going to want to miss.

Thanks again for hanging around and if you haven’t already, head over to the Art of the Trailer and check out the new Muppets trailer there!

Hello all!  I thought I would take a break from my reviews to share some news, and have a little ramble.

First, my IRONY MOMENT OF THE WEEK!!!  I was cleaning my room recently, being all productive and stuff, when I found my old Pokemon Ruby Game. Now a bit of history: I have been playing Pokemon games since the first set (Red & Blue). I can still remember playing them on my Original B&W Gameboy at the ballpark when I was 10.  Good times… Anyway, in the 10 years I have had since I have never, repeat NEVER, beaten one. Seriously. I bought every game up to the ruby/sapphire generation and have never beaten any set of Elite Four and Champion. I either spent all my time focusing on completing the Pokedex or lost interest before getting there.

Now having said that, I decided to play the game a bit just for old times sake.  I had made it all the way to Stephen, the Champion, before but I could never beat him.  I decided to try victory road, again just for kicks and made it all the way to the final battle of the 5 and somehow, having not played in over a year now, I BEAT HIM!!! It was so crazy!!! I finally beat a Pokemon game!!! Part of my childhood had ended, IRONY, on the day that the Last Harry Potter film came out!! Just an amazing thing that those two coincided with….the battery died.

It was just hilarious that I had waited so long for that moment and when it comes I was robbed of it 🙂 I did go back and beat it about an hour later after I had gotten over how funny it was.  The ending was awesome just as i had always read in my strategy guide (JK!! Haha. Just…..just kidding…….totally not me………..yeah. I did read it cover to cover….yeah.) I loved the Hall of Fame thing and the credits (didn’t even know they did that!) and then….at the end….it says….”THE END”  😀

So now that the embarrassing, end-of-my-childhood moment story is over, I turn to a more philosophical thought.

Something which I have been trying to nail down for many years is how one appreciates a work such as film or book. Recently I had a breakthrough thought which I’d like to share with you for your thoughts.

Our society seems to stress two conflicting opinions.  First, post-modern culture puts forth that appreciation of art can be had in any form or way and by any medium, but I will focus on the thought that no Understanding is required for Appreciation. The Second worldview, coming from Academia, says that in order to fully Appreciate something, one must have full Understanding of it.

Let me give two examples to clarify.  The former puts forth things such as John Cage’s 4’33” or Jackson Pollock’s abstract art as important because each person experiences it differently and in unique manners. The Latter would take things such as Elgar’s “Enigma Variations” and say that in order to fully appreciate it you must know that it was done as a fun exercise with his wife, and that each variation is based on one of his friends.  Obviously the two are in conflict and thus I turn to film.

My friend Ryan and I have a disagreement. Last year he gave me the French film Amelie as part of the inaugural Summer Film Challenge. When I started the movie and realized it was entirely in French without subtitles, I made the decision to watch it without them.  I had taken French in High School, but the true reason I made that call was because I wanted to see what the film was like unhampered by English text muddling the image.  I wanted to watch it as the French did, and I am not sure whether Ryan has forgiven me yet. 🙂

The reason I bring this film up is that I just ordered it on Amazon and I am not sure I will ever watch it with the subtitles, which brings us back to the original point:

What is the relationship of Understanding to Appreciation?

I propose these thoughts on this issue:

As my friend Ryan pointed out to me, I did miss the full meaning of the “Counting Orgasms” scene.  However I was able to appreciate that sex plays a major role in the life of Parisians in Amelie’s world and that she is keenly aware of the sexual world around her while remaining aloof of it. I was able to gleen that without being told it by verbal means. This shows me that their is a level of appreciation which is obtainable and important because you experience something unobtainable otherwise.

If you enter into something without understanding and experience it, you are able to return later with understanding and have a new experience (see – INCEPTION).  However, this path cannot be traversed the other way; if you know going in, you can’t experience that Magic (see – INCEPTION again). You can never watch Fight Club, Memento, even Jaws the same way you did the first time, so I stress the importance of not missing appreciating something as wonderful, magical and worthy of our awe.

Just to point out, I do see the irony that I am discussing “Magic” both in the context of the fanciful film Amelie and on the eve of the finale of Harry Potter franchise. 🙂

Thanks for sticking around.  Please tell me what you think about how we appreciate art, film, etc.  I’d love to hear from you!